In June 1971 at the age of 20, George Frumkin graduated from Yale University with honors. Offering his diploma to his mother, he remarked, “Much knowledge but still no wisdom.”

Leaving home one week later in search of that wisdom, George traveled to France to take up employment as an English instructor at the University of Grenoble. While in Paris, he encountered Krishna devotees for the first time and got a copy of Bhagavad-gita As It Is by His Divine Grace A.C.Bhaktivedanta Swami Prabhupada.

The ensuing transformation was nearly instantaneous. Instead of reporting to his new job, George joined the International Society for Krishna Consciousness (ISKCON). That same year, while on sankirtan in Geneva, he became Srila Prabhupada’s first initiated disciple in Switzerland receiving the name Guru Gauranga Das. 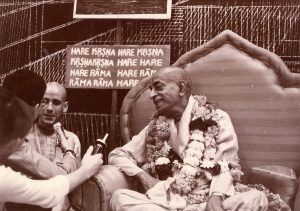 As president of the first Krishna temple in Switzerland, Guru Gauranga laid the groundwork for ISKCON’s future growth. In 1973 he succeeded in lifting a Geneva police ban against the public chanting of the Holy Names (harinam sankirtan).

One year later he was able to arrange Srila Prabhupada’s official welcome to Switzerland at the historic seat of government of the Republic and Canton of Geneva. On May 30, 1974, Prabhupada was received in an ornate ceremonial room of the Hôtel de Ville, where Pope Paul VI had been received a few years earlier. With Guru Gauranga Das at his side interpreting in French, Srila Prabhupada formally addressed the President of the Geneva Council of State about the relevance of Krishna consciousness in a materially advanced society.

In private meetings and colloquia arranged by Guru Gauranga Das, Srila Prabhupada
laid out the science of Krishna 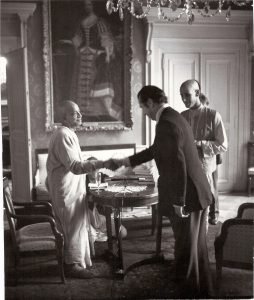 consciousness to officials of the World Health Organization (WHO) and the International Labour Office (ILO), scientists of the European Center for Nuclear Research (CERN), prominent Swiss intellectuals, theologians, writers and church leaders. Srila Prabhupada also preached to the Swiss public at large during a two-day “Festival of India” organized by ISKCON.

In 1978 Guru Gauranga obtained approval to hold a historic Rathayatra in the heart of Geneva. It was one of the first public Rathayatra parades and festivals in a major European city outside the U.K. As ISKCON regional  secretary for Switzerland in the 1980s, Guru Gauranga led the preaching and helped coordinate the massive distribution of Srila Prabhupada’s books by Switzerland’s world-leading traveling sankirtan parties. He also successfully negotiated the acquisition of the Julius Bär mansion in Zürich transforming it into a magnificent Krishna temple with the help of many Swiss devotees. 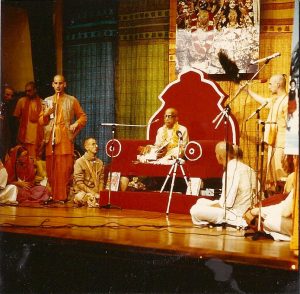 In 1985, Guru Gauranga launched a campaign to shield ISKCON and Prabhupada’s book distribution from the toxic propaganda of the anti-cult movement. Targeting the “Anti-Cult Counseling Centre” of the Catholic Church in Switzerland, ISKCON struck back by filing a libel suit against the Church’s main spokesperson on “anti-cult matters”. After a prolonged court battle in the predominantly Catholic canton of Luzern, ISKCON emerged victorious. The court found the Church spokesperson guilty of criminal libel, assessed a fine against him, sentenced him to publish full retractions in the media and ordered the entry of his libel conviction on his police record. Shortly thereafter, the Church closed its anti-cult counseling centre.

In early 1986 Guru Gauranga joined padayatra in India chanting and walking his way to the quincentennial celebration of Lord Caitanya’s appearance in Sri Dham Mayapur. Upon arriving with the padayatra at ISKCON’s world headquarters, Guru Gauranga discovered that he had been elected to ISKCON’s Governing Body (GBC).

After a number of challenging years as GBC Minister of Justice during which he established ISKCON’s first internal conflict resolution process, Guru Gauranga enrolled at the University of Chicago to study law while continuing to discharge his GBC duties. 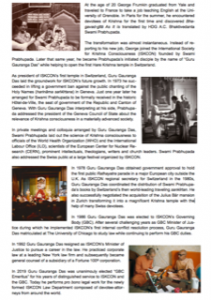 In 1992 Guru Gauranga Das resigned as Minister of Justice to pursue a career  in law. He practiced corporate law at one of New York’s leading international law firms and subsequently relocated to São Paulo, Brazil to become general counsel of the South American operations of a Fortune 100 multinational.

In 2016 the GBC sought Guru Gauranga’s counsel to prevent the sale of ISKCON’s New York temple, which was already under contract to a real estate developer.

Working closely with the 2016 GBC Executive Committee, Guru Gauranga organized an informational town hall meeting at the Brooklyn Public Library to conciliate a polarized temple congregation. Guru Gauranga then assembled a legal team to file a civil action in the New York courts for the purpose of declaring the sale contract unenforceable, ousting the rebellious Temple Board and installing in its place a new Board loyal to ISKCON and the GBC.

By Krishna’s mercy, ISKCON’s legal team has prevailed at all levels of litigation although a final, non-appealable decision has not yet been issued.

In 2018 Guru Gauranga’s persistent efforts to obtain GBC approval for the creation of an in-house law department bore fruit. An ISKCON Law Department was formed and is now composed of devotee-attorneys from around the world. For the Law Department’s first two years, Guru Gauranga served as senior legal advisor to ISKCON’s General Counsel.

For his many years of distinguished service to ISKCON and the GBC, Guru Gauranga Das was unanimously elected GBC Emeritus in 2019. Now a septuagenarian, he serves the GBC in an advisory capacity.